The Perils of Running a Frozen River Require Flexibility

“Oh, Eeyore, you are wet!” said Piglet, feeling him. Eeyore shook himself, and asked somebody to explain to Piglet what happened when you had been inside a river for quite a long time.” ― A.A. Milne

Several days ago, Kyle Palmer told me that he and his girls had walked down to the St. Croix River at the point where we plan to have the half-way aid station. To his dismay, he found open water where the usual ice channel should be.

This evening, Kyle and I set out to inspect the half-way entry point as well as several other options should Kyle's earlier assessment prove correct. Not only was Kyle correct, but we discovered some alarming situations that may require amending the 2014 Full Moon Frozen River Run. At the half-way point, we found that near the shore (and as far out as our 4 foot stick could reach) just below the 5 inches of snow, there is another 5 inches of slush. It didn't take much pressure or force to reach the slush. What was even more alarming was that there was a channel of snow 15 feet from shore that was a light grey color rather than the pure white of all the surrounding snow. Needless to say, we did not try to access the river here.

Now, let me define SLUSH. It is the icy, water-infused snow that lies below the non-water-infused snow. The snow on top ranges in thickness from 2 - 10 inches in places. So, to reiterate, on top is the wonderful, pure white, fluffy, I-love-you,-you-love-me, I-can-cancel-school-if-there-is-enough-of-me snow. Lurking underneath is 3-8 inches of grey, icy, I-hate-you,you-should-hate-me-unless-you're-in-the-dessert, I-will-freeze-your-toes-off, nasty almost ice snow. The water-infused, nasty snow underneath is not completely frozen but is almost frozen and becomes frozen within about 3 minutes of being exposed to the air. Underneath the nasty water-infused snow is .... solid ice. So solid that we could run on it. The problem: when running in this type of cold weather, or even warmer weather when on a river, is that having wet toes is very dangerous. Being wet above the waist is fine, to a certain degree. Even being wet in the waist is fine :). But being wet below the knees is problematic, and the problem gets worse with time. And when running on a river, one has lots of time.

Well, getting back to Kyle and my investigation, we ran back up to our cars and drove to the trailhead of the trail that runs somewhat parallel to the High Bridge, located a mile south of the half-way point. We ran the trail down to the river. As we began seeing the river, we noticed large channels of grey snow along the MN bank. We also found an open water channel along the MN bank. Along the edge of the river, we once again encountered SLUSH. This extended as far up and down the bank as we could see and out into the river as far as our branch (now a 6 ft one) could reach. So, we ran back up to the High Bridge where there is always good access onto the river. SLUSH! In fact, there were tracks of a daring XC skier who had skied out onto the river since Sunday night (the tracks had no sign of wind-blow from Sunday's intense winds). About 15 feet onto the river, the ski track showed signs of deep SLUSH, with at least five feet of darkened tracks, before they grew white again.

What was most disturbing, however, was that out in the river, where the snow mobile highway lies, we spotted a 10 foot wide, 30 foot long channel of grey snow. That means SLUSH. In one of the most stable places for running.

With this extreme cold it is mind boggling to see so mush slush. Here is Kyle and my assessment: this year's early freeze placed a a thinner layer of ice on the river. It then became covered with snow, lots of snow. Now, two things are happening. First, the snow on top is insulating the snow underneath, preventing it from becoming more solid and preventing any SLUSH from freezing. Second, the river is a river. It continues to receive from streams, springs and seepage from limestone and other rocks (lots of ice falls along the river) more and more water. This creates lots of pressure. Not all of that pressure can go downstream. Some seeps up around the edges of the ice along the banks of the river and up through normal open water areas. This water then tends to flow on top of the ice. This would explain why several weeks ago I encountered a channel of SLUSH right in the middle of the river about 20 feet south of the Stillwater lift bridge, an area that is always frozen and stable.

Please see the diagram below showing this theory: 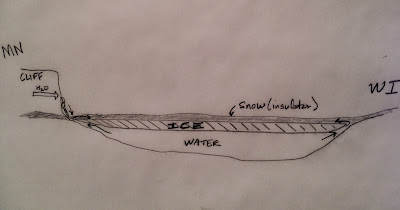 So, FLEXIBILITY. Depending on the changes in weather and temps in the next weeks, we may alter the course in order to avoid potentially hazardous entry-exit points.

Brief details: 12, rather than 16 miles. Start at lift bridge and run 3 miles north and return to lift bridge (potential bonfire on WI side with soup and...smores) then 3-4 miles south and return to lift bridge. Yes, two out-and-backs. And, it's not the most dramatic section of the river. But, this is the most stable section of the river (4 wheel drive trucks drive on plowed highways on this part of the river), and it's likely that you will have a cheering section from all the folks in the downtown bars.

We'll keep our eyes on river conditions and keep everyone informed.

Running for more than running,
Joel
Posted by Unknown at 8:17 PM

For what it's worth... I know that the river has seen quite a bit of snowmobile traffic south of the bridge. But the River Crossing project has been warning people of getting too close to the construction, due to the poor ice conditions the construction creates.