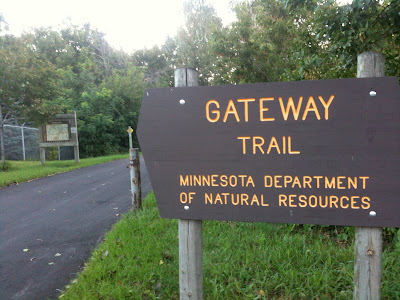 Dark. Starry. Saw two shooting stars. Ran to Gateway Trail. Gateway Trail to State Capitol. I ran mostly without headlamp. I could tell where the tree covered trail was because it was solid black while the surroundings were not solid black. Near Highway 36, a bicyclists with headlamps as bright as a locomotive went by, heading north. We met again near Interstate 35 later in the morning. He was now going south. I was going south both times.

The sun came up as I neared Interstate 35. St. Paul buildings glistened. I ran across the Capitol mall.

Summit Ave gave me renewed vigor. Running the opposite direction of the marathon always does. The bottle of Coke in a Big Gulp cup of ice also renewed me. So did my new Running Playlist, including incredible songs from Lifehouse, Theory of a Deadman, Green Day, Coldplay and Tyrone Wells. 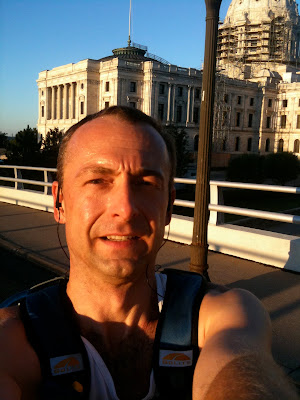 Walk, run. Repeat. All the way down Grand Ave.

Up West River Road, along with every single possible runner in Minneapolis. I was the least fashionable.

West on Franklin. A great avenue, just not a great running avenue. Saw some 8:20 min/mile pace during the last half hour.

Eli handed me a bag of clean clothes at 32.29 miles, 6 1/2 hours after leaving home.
I changed and lingered in the coffee and doughnut area of the church as long as church etiquette allowed. Thank goodness for the Fees, who helped me stretch that a long time.

Then, entered sanctuary and "caught" last 15 minutes of sermon. I actually comprehended most of what I heard. Also able to stand for last song. And go down stairs afterward to get little one from nursery.
Posted by Unknown at 6:55 PM

Wow! What a neat run!

I've done the Gateway early before (although more like 4:30 instead of 2:30). It really is dark, but a neat time to turn off the light and just enjoy the night.

Great way to end the run too!